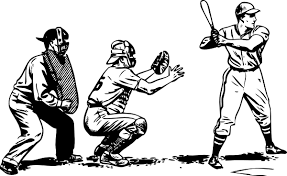 This time of year has me thinking about baseball! The weather is slowly warming, plans begin to grow, and opening day is upon us in the Major Leagues. I have many fond memories of baseball growing up, playing with friends in open fields. Never fielding a full team but just the pleasure of pitching, hitting and throwing. Growing up my father put more emphasis on individual sports, “You want to play a sport that you can do by yourself” he would often share. Reminding us that we never had 18 kids to play a “proper” game in the neighbors yard. As I grew up, I did focus on other sports enjoying basketball, tennis and golf because playing them did not require a full squad of players. My father also place a greater value on knowledge than physical sports skills. Should I have spent more time learning to swing a bat?

This week Miguel Cabrera signed a record deal to play baseball, $292 million dollars for the next ten years. I am happy for him. He is probably the best baseball player of our time and in the discussion as being one of the best of all time. Miguel Cabrera is going to make roughly $50,000 per at bat for the next ten years with the Tigers. (If he averages 600 at bats per year.) That is about the average yearly salary for teachers in Michigan! WOW!! Over the course of this 10 year contract he will make enough to pay for 6000 teachers for a year. Well he is the best player in baseball right now, right!

Cabrera has a .321 career batting average, which is great for baseball (50th all time). This means he makes an out .679 of the time he makes an out! If a teacher in the classroom had .321 success average and .679 failure average, most school districts would find them ineffective. Yet in baseball this is one of the best ALL time? Is hitting a ball harder than educating a student? Education and teaching is undervalued in today’s society. Fans flock to “average” teams. Every school child aspires to be a professional  athlete at some point growing up. How can we make this happen for education and teaching? 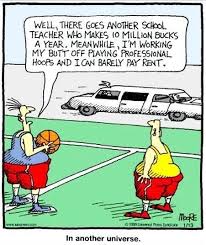 If the current trends in education continue, our best students will not want to be educators.

We had a great chat tonight about how movement is necessary to help engage students. Who can sit for an entire class period? I can’t sit still for 15 minutes. Kim Campbell wrote a great article for AMLE  that the chat was based on. The day of a quiet classroom and students sitting neatly in rows is over! Schools need to plan for student movement if they are going to be successful. Below is the archive for the chat. When I first started hearing about coding on Twitter, I was intrigued. I remember when I was in school learning how to use Basic programming. “If this then that… ” and Go to Line XX” statements bring back frustrating memories of the green screens. I at first figured I needed to take a class to figure out how to program myself, then learn to teach it, then bring it into my middle school classroom. After hearing a few elementary teachers talk about coding clubs and coding in their classrooms, I figured I needed to get up to speed with coding so my students could experience it.  As I was checking out coding sites, I noticed that Code.org celebrated an anniversary and placed a version of the “flappy bird” came on their site. At the same time my 4th hour ten week “Maker” class was begging to try something new.

So, I took the plunge.  I worked through the code.org activities at night, teaching them the next day. My students were instantly engaged. Eager to make their own games. Being a group of diverse learners, some were done in minutes, while others took all class period. All ended up making a game. The learning that was happening in the classroom was astounding. Students were asking each other meaningful questions, trying different lines of code, failing and then fixing the fail. They were proud to share their games with classmates.

Every seventh grade advisory class heard about our “games”. Students who took the class earlier in the year  complained that they did not get to code. We continued through the lessons on code.org until the students wanted freedom to make something on their own instead of using prescribed codes. We have since moved on to Scratch, which allows the students more freedom to create animated scenes and games. I am barely ahead of the students, often having to model problem solving skills on the fly to help them find success. We are learning to code as a class. The class has experts who even I go to with questions, because they go home and “play” with code to produce their desired results. A few students aren’t as engaged but they still are learning how to figure out code.

If you haven’t tried coding with your students, you should do it! I saw learning in the rawest form. We were learning as a class. Everyone wanted to complete the task. I now have students who are not enrolled in the class but e-mailing in the assignments to show what they have learned by following the class tasks list. Coding has lead to more engagement in authentic learning for my students. They are coming to class wanting to see what they can learn each and every day.

So the data is in from the Michigan Educational Assessment Program(MEAP) Fall 2014 8th grade  science test.  Doesn’t look good, 20 % of students in the state were proficient 55% Not proficient at all. Staggering numbers to say the least. To really understand the MEAP science results one needs to understand the testing cycle. The 8th grade test is given in October covering standards taught from 5th grade through 7th grade. Due to limitations on the number of questions on the test (around 40) MEAP test questions narrowly focus on just a few units of study covered over a 3 year span and cover  general science processing skills. The science test is given as the last assessment for the students to take in the state assessment program so they are a little tired of testing. These test are used to grade the schools and districts but have little to no meaning to the students. Grades are not effected, proficiency is not required. As a science teacher I am ashamed of these scores. What do I do?

Are the results an accurate measure of Michigan’s students science ability? We still have students going to college to be doctors and engineers. Maybe they are the 20% proficient in 8th grade. Should this large a group score so poorly on any test? I don’t think so. When I have gotten similar results in my classroom, it is time to re-examine the curriculum used, how it was delivered and if it lines up with the test. Obviously something is amiss here. When looking at the science MEAP trend:

It is even more troubling. Out of all the students in the state of Michigan less than 20% have been proficient for 5 strait years. This is totally discouraging as a science teacher. 5 years with only minor improvement. One would think the test would be changed to give the educators and districts better feedback as to how their programs were working. With these results it just looks like schools are not teaching much in the way of science. Is that the case? DO districts focus so much on math, reading and writing because they are tested every year and let science slip to the wayside?

The state of Michigan needs to examine this test, adjust it to measure the skills taught. Make sure that the questions are above the knowledge level with out being vocabulary specific. Or better yet stop wasting money on a test that doesn’t give us results that can be used to help our students learn.

It reminds me of a story my younger brother shared when in college. Philip was a graduate student at Duke, taking an undergrad prerequisite at UNC. His professor had to talk to with him because he ruined the curve. He received scored a 96% on a test that the class average was 35%. The professor wanted to curve the test but Philip’s score would not allow him to curve it equally for all students so the professor had to explain his actions. As my brother shared the story he state, “It is ridiculous to create a test that the majority of your students fail.”  My sentiments for the Science MEAP!